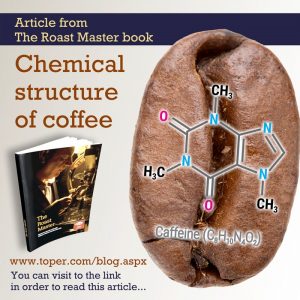 A coffee bean has more than a million cells. During roasting, more than a thousand different variable compounds, of whose 850 are known, appear, as if they hide in a safe place and come out by roasting. 2

The following sample gives us the considerable effect of each cell making coffee so characteristic.

Raw coffee beans are dense, green seeds consisted of about one-half carbohydrate in various forms and one-half a mixture of water, proteins, lipids, acids, and alkaloids by volume.

Roasters do not need to know much about green coffee’s chemistry to roast delicious coffee, but we offer the following summary to familiarize readers with the primary components of green coffee. 3

Coating the cellulose strands within that matrix are hundreds of chemicals that the roasting process will transform into the oils and soluble materials which determine brewed coffee’s flavor. Green coffee’s cellulose structure provides half of its dry weight. The cellulose helps little to coffee flavor but does trap some volatile compounds. These compounds are responsible for the aroma and increase brewed coffee’s viscosity together with its perceived body.

If moisture content is too low, bean color is typically faded and the cup has notes of hay and straw. A roaster must apply heat cautiously to low-moisture beans, as they are likely to roast too fast.

If moisture content is much higher than 12%, green coffee is prone to developing mold, and may taste grassy in the cup. Water slows heat transfer within beans, and it requires extra heat input to evaporate. Therefore, roasting the very moist beans requires extra energy, added time and roasting power.

Sugars, dominated by sucrose, make up 6% to 9% of a green bean’s dry weight and provide sweetness in the cup. 5

Sucrose also contributes to development of acidity, as the caramelization of sucrose during roasting yields acetic acid.

Lipids, primarily triglycerides, make up approximately 16% of green coffee’s dry weight. 6 Although lipids are not water soluble, brewed coffee contains some, especially when the brewing method uses either no filtration or a very porous filter.

Unfortunately, lipids also present challenges to quality, as they are vulnerable to oxidation and rancidity during storage of roasted beans.

Proteins and free amino acids make up 10% to 13% of green coffee by dry weight. 7

Two alkaloids, caffeine and trigonelline, each account for approximately 1% of green coffee’s dry weight. 2 They are responsible for much of coffee’s bitterness and stimulating properties.

Caffeine contributes approximately 10% of coffee’s bitterness and the majority of its stimulant effect. Coffee plant produces caffe- ine as a defense against insects. A coffee tree grown at high altitudes would probably produce beans with less caffeine because of the lower risk of insect attacks.

Trigonelline, the greatest contributor to coffee’s bitterness, yields many aromatic compounds, and degrades to pyridines and nicotinic acid during roasting. 8

Nicotinic acid, also known as niacin or vitamin B, is present about 40 mg in 100 g of dark roasted coffee extract.

Coffee contains 20 to 80 ml of niacin, responsible for coffee’s anti-cavity effect, depending on the degree of brewing. 9 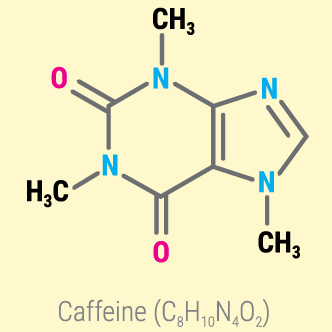 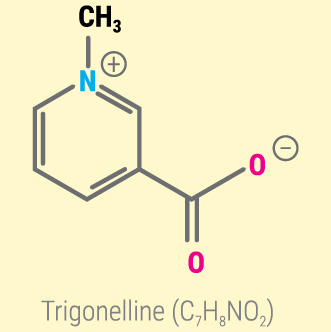 CGAs offer antioxidant benefits for both the coffee bean and the coffee drinker. Other organic acids in coffee include citric, quinic, caffeic, malic, acetic, and formic acids.

Volatile aromatic compounds produce the coffee aroma. Although there are more than 200 volatiles in green coffee, their contribution to the aroma is negligible.